September 1986, got some tickets for floor seating at the Coliseum in NY (long island). Main reason why I wanted to go to this show in NY (not locally) was because we had recently met some smoking hot metal head girls from NY down at the Jersey shore (yeah Seaside NJ... the one from THAT tv show) over the summer. We were planning on meeting them at the concert, so with four tickets in hand and a couple good buddies ready, we were all set.

This was going to be an epic time, so we decided to make a whole day of it, and set out early for the couple hour ride. 10 o'clock in the morning was the time planned to leave so we could spend the whole day in the lot tailgating. Things did not go exactly as planned right off the bat. One buddy got in trouble with his folks and that morning tells us he can't go as we are about to leave. Really? After a few phone calls without finding immediate backup, we take off with three because we figure we were already missing some good party time. One soldier down.

Arrive at the parking lot around noon, expecting to see some tailgating going on, but it turns out we are the only ones there ( except for that security van rolling around with the stupid yellow light spinning). Not a big deal for us, we claim 'first ones here!' crack a cold one, crank some tunes and start the adventure. A short while later, we see a van (typical 70's style party pit) roll in and park nearby. We see we're not the only ones who enjoys a 7-8 hour pre-party, so we introduce ourselves and without going into detail the rest of the afternoon was a great parking lot party.

It starts getting dark on the now full lot and the opening band is about to hit stage. The girls have not shown up yet, they were supposed to arrive around now (had to work or something that day and could not make the lot party). We wait for a while but had plans to meet them by the concessions if they could not find us in the lot, so we go in. REMEMBER that you can forget about cell phones we did not even have beepers at the time! The opening band is some ridiculous Japanese metal wannabees and with their screeching overly accented broken English vocals filling the coliseum and it being floor seating (standing), we head over to the concessions in the lobby hoping to hook up with the women. We are not hanging around more than 5 or 10 minutes when mayhem strikes. One of my buddies had a gold chain on, and as we are standing there some scum rips it off from behind and takes off into the crowd with my buddy in hot pursuit. He catches the dude and starts pounding him about the same time security catches up to both of them. My first 'hello' with security is a conversation as to why they should not toss my buddy who was the victim of the theft. Conversation goes nowhere, buddy gets tossed. Second Soldier down.

With just me and my wingman left we decide to head into the floor (which was basically like one big mosh pit by now) to check out the screeching (sounds like South Park's City Sushi guy belting out the vocals) of the opening act. We will only mange to catch a few songs before mayhem strikes again. I don't know if it was the 8 hour party session, or some reaction to the bad music, but as I'm standing there my wingman just kisses the deck like a sack of bricks! Fully passed out, I have to carry (drag actually) his butt all the way back to the lobby. Conversation number two with security goes something like this: "you have to tell us what he's on"...."just alcohol I swear". After some convincing that he was just drunk, they allow me to take him out and drag him ALL the way back out to my car in the parking lot (with no assistance). A LOT farther than I remembered walking in LOL! I dump him in the front seat (had bench seats in my car) and he looks like the twin of the by now also passed out buddy in the back. Third Soldier down!

So by now I'm solo and my only chance of salvaging the night socially is to find our 'dates' , but I have no possible way of contacting or getting in touch with them! But since ACDC has not even taken the stage yet, I can still see salvation, I'm not giving up, mayhem will not get the better of me, I am NOT MISSING THIS SHOW. With wristband on wrist (floor seating used those) I marched back in waiving my wrist at security as I go by, head to the floor and get there just as ACDC is hitting the stage. WoooHoo I'm on my own roll now.

The floor is a can of sardines but I do not care. The band is belting out the tunes and I'm loving it as I smash my way thru the crowd towards the stage. With no one else holding me back, I'm getting up by the front row. I manage to do it, and actually find one of the guys from the (parking lot) van up front hanging on the railing, and slip in next to him . YES, FRONT ROW!!! The band is killing it, working so hard that Angus and Brian are dripping with sweat after only a few songs (it was very hot). I guess the knickers weren't cutting it as after every song Angus would hang another piece of clothing on his mic stand on my side of the stage. You had to hold onto the front rail up front if you did not want to be swept away by the movement of the crowd. People were getting crushed, and the security bouncers who walked the dividing line between the rail and the stage started to have their hands full as a couple girls who were getting crushed up front needed to be pulled over the rail and out to safety. The Band was kicking the crowd into a frenzy like no one else can.

As I watched a few girls get rescued I could not help but think of the ones I could not find, scanning the crowd at every song break. Where the heck were they? Would I ever find them? Then it happened, this dumbass idea crept into my skull. While scanning the crowd I realized that if I could not see them, then maybe they could somehow see me. Heck the stage was just a short jump away from the top of the railing that I was clinging onto. If I could somehow get on stage they would HAVE to see me. I devised a half-baked plan. Why not just jump on stage where they could see me and stage dive back into the crowd? Then the band kicks off one of my favorite tunes....'Jailbreak'!! It pumps me up beyond the point of return. As the song hits the slow section, I see my opening, climb the rail and leap.

Barely catching the edge of the stage I bolt through the feedback speakers up to Angus's mic stand (he was on the other side of the stage). With no live mic and only his clothes draped on it I grab them and start swinging his tie around over my head. The crowd let out a roar that dazes my sense of reality. Somehow frozen in time, I totally forget the second half of the plan (stage dive) and bask in the crowds roar.

Next thing I know some BIG security dudes are rushing me (cutting of my only exit, they are between me and the crowd) I'm backed up to the wall of amps behind me, but offer no resistance as I'm grabbed off my feet by two dudes who look like they are going to re-arrange my face. At that point Brian tries to come to my rescue. He said something to them like "it's ok, it's/he's cool" . But they did not seem deterred as they carried me (with feet dangling like a cartoon) off the back of the stage down some steps. 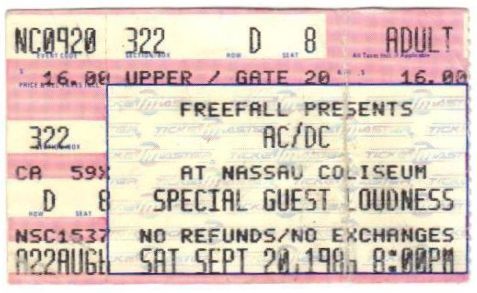 Holy Crap! What have I done? Where am I going? I can't go to jail tonight (as the band is finishing 'Jailbreak' LOL). I'm carried down a dark hallway with these guards screaming stuff at me like "give me back that tie" (still clutched in my fingers). My mind is racing as they kick open some double doors and launch me like a ragdoll into the white light. I sail thru the air and hit the ground HARD.

As I regain my senses and my eyes adjust to the light I 'm trying to figure out if I should try and get up or if it would be better to just play possum/dead. Afraid to turn around, I froze there for a moment until I realized something was too quiet. I look around and the bouncers are gone! Where the hell am I???

I can still hear the band jamming in the background as I look around and realize where I am. In the F'in lobby/concession area still inside the Coliseum!! They did not even kick me all the way outside!

I pick myself up, and dust myself off, debating what I should do next. Battered and shaken, I look around the totally empty lobby (except for the lone counter dude who is just starring at me). On the right are the doors back to the show, on the left are the escalators to the exits.....what to do. Thinking about my friends back in the car, and realizing how close I came to disaster, I concede the night to mayhem and admit my defeat. With the show still cranking, I stumble over to the escalators to take the slow ride of shame.

The rock gods would have none of this tho (this was after all an AC/DC concert). Just like something out of a movie script, the craziest of all things to happen that night was just beyond the top of the escalator. With my head still hung low and my gaze still directed towards the floor as I walked to the exit, the door opens up for me. All I see are these sick black spiked high heels and black spandex that was shoe string laced on either side from the ankle to the hip. My eyes moved up past the sparkling red overloaded tube top up to the face of an angel. You guessed it, my 'date' had JUST arrived with her friend and was walking thru the front door as I was walking out!

"hey awesome we found you. I was afraid we wouldn't be able to with the crowd, we got lost on the way to the show and just got here". Now this made no sense to me (because she was from NY and I came all the way from Jersey) but at this point I did not care. I threw her on top of my shoulders (literally/concert style) grabbed her friends hand we fought our way back up close to the front row.

She did not believe that I was just up on stage before she got there (neither did my friends back at the car) until some people in the crowd confirmed it. I gave her half of Angus's Jack Daniels t-shirt that I had managed to somehow keep in all the commotion, and we rocked the rest of the night to the BEST AC/DC CONCERT EVER.

PostScript: Fourth Soldier (got) Down